Skip to content
Most Orders over $50.00 Eligible For FREE SHIPPING

The History Of NHL Jerseys

Have you ever wondered why hockey jerseys are often called sweaters? It’s very simple and the reason is because in the olden days of ice hockey, that’s precisely what the players used to wear-sweaters. And they were no different than what you would find at local men’s clothing store. So what happened is that teams would purchase several sweaters with the exact pattern, stick a number on the back and in some cases a logo on the front and call it a day. Times have changed and these jerseys have undergone tremendous changes through the years. The following is a brief history of NHL jerseys and how these jerseys have undergone tremendous changes over the years.
Early jerseys had their own unique patterns, which might have consisted of stripes or even chest bands with contrasting colours. During those days, television had not yet been invented, which meant that there was no need of outfitting teams in several jerseys. Certainly, every person at the arena was able to tell a blue jersey from a red jersey-right? Solid colour jerseys started being introduced towards the end of the 1930s, and intricately designed crests started making their appearance. In addition, the pants stopped being of neutral colour and teams adopted their team colours for them.

Initially, the NHL consisted of only six teams (Original Six), and this is an era that saw teams adopting traditional colours for their uniforms. From 1942-1967, a jersey was either blue, red, black, white or gold. And then the expansion became a reality when six new franchises were added to the hockey league. All of a sudden, every colour that you could find in a rainbow was now being represented on the hockey jerseys. For instance, the LA Kings introduced the colour purple, which was now their official colour after ditching their regular blue jerseys. The Philadelphia Flyers reintroduced the colour orange while the Minnesota North Stars and California Seals were now playing in green jerseys.
But this was not the end of the introduction of new colours to team jerseys, and in 1970, a flamboyant owner called Charlie Finley acquired the Oakland Seals, which he renamed as the California Golden Seals. After changing the team name, Finley decided to change the team colours to what his baseball club was wearing-gold and green. The players were even given white skates, which was rather funny because these players now looked like figure skaters when they were playing. Given the teams win-loss records, it seems that the team actually played like figure skaters. When the team was later sold in 1974, it adopted the colour teal for its jerseys.

The Washington Capitals were the latest team to join the league in 1975, and the franchise decided that wearing red jerseys with white pants was the way to go. Even though the team reached the playoffs on their debut year, the white pants subjected the team to massive ridicule, which forced the franchise to ditch the colour. It was also during this year that the Kansas City Scouts were added to the league, and their team colours were blue, red, yellow and white. This was now the 58th season of the NHL and by now the league had expanded to 18 teams, and the divisional structure and playoff format were redesigned.

The most radical change to emerge from the late 70s was perhaps that one from the Vancouver Canucks. The franchise paid a princely sum of $100,000 to hire a marketing firm based in San Francisco to redesign the team’s conservative uniforms. But what they got is now categorized among the worst eyesores in the history of American sport. The team jersey featured huge Vs, which were meant to represent Victory, rather than Vancouver, the city in which the franchise was based. Thankfully, the uniform was redesigned when a new general manager took over.
Players also had the privilege of having their names on the back of their jerseys during the 1970s. The first team to experiment with this design was the New York Americans in 1926, but the idea was not well received. The New York Rangers reintroduced this concept, and they were lucky because this time it found acceptance. Before 1977, the home teams had the choice of wearing names on their NHL Jerseys while road teams needed the home team’s permission to do so.

The 1977-78 season saw the introduction of the rule requiring all teams to wear names on their jerseys. Initially, the names would be placed horizontally across the jersey but in 1982, the Detroit Red Wings experimented with vertically-arched names. In January 1968, Bill Masterton was playing for the Minnesota North Stars when he tragically died as a result of injuries he suffered during a game. After this unfortunate incident, some teams started providing helmets for their players and it soon became more widespread. And in 1979, there was an additional rule that was introduced, which required players signing a contract on or after the 1st of June 1979 to start wearing helmets.
In 1981, the NHL made attempts to make the uniforms lighter, and the result was the creation of Coveralls, which made use of long pants instead of the usual short pants. The first team that adopted this new style was the Philadelphia Flyers. The Hartford Whalers soon followed the trend, but players soon discovered that long pants caused them to slide faster whenever they tumbled onto the ice. The NHL therefore decided to ban Coveralls and teams reverted to short pants.

The 1991 season saw the debut of the San Jose Sharks, and the franchise adopted teal as the team colour. The team’s uniform quickly received praise, with the NHL adopting the colour for the uniform worn by the Eastern Conference team during that year’s All Star Game. The Mighty Ducks of Anaheim entered the league in 1993, and the team’s official colours were eggplant and jade. More wild designs began emerging during the mid-1990s, with the New York Rangers featuring a weird logo of a fisherman on their jersey. After only two seasons, those logos were discarded and the design of the team uniform was discarded after three years. 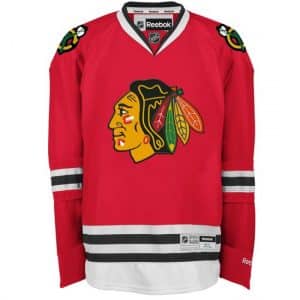 In early 1996, the NHL introduced the concept of a third jersey, and this gave rise to even more wild designs. For instance, the Mighty Ducks featured a logo of a duck wearing the goalkeeper’s equipment while crushing through ice. The Kings jersey was white and it had a logo that resembled the mascot from Burger King. Wild designs were now a staple of the NHL, and it seemed as if this was a fate that hockey fans would have to accept as being part of the game.

In the mid-2000s, hockey fans would get a reprieve when the NHL commissioned Reebok to be the official uniform supplier. The company was specifically asked to come up with a lighter and more breathable hockey uniform. Research and development took two years, and the final result was Reeboks Edge uniform system. This uniform made its debut during the 2007 All Star game. The following season, thirty teams would wear this uniform, and many of them chose to maintain their old uniform design. Some teams used this occasion to introduce new designs.
The 2007-08 season was a turning point because teams started complaining that the new Reebok jerseys were trapping the moisture instead of wicking it from the players’ body. Reebok responded by changing some materials and new jerseys were issued to all teams. At first, purists were dismayed by the uniforms but the Edge system has now come to be accepted by everyone in the game. So there is much hope that this uniform will continue being popular for decades. The good news is that you can buy the Official NHL jerseys right here. We buy directly from Reebok and so you can expect to get quality merchandise at the best prices. As a seller of official licensed jerseys by Reebok, you can also expect to find genuine products.
Some of the Jerseys that you can buy here are for high flying teams such as the Florida Panthers, who currently lead the Atlantic division standings. The team has played 44 matches, winning 26, losing 3 and going to overtime on five occasions in order to secure victory. Their goalie, Roberto Luongo has been one of the outstanding players in the NHL and he is in line to receive an individual award at the end of the season. He helped his team to register 12 straight wins thanks to his efforts in front of the net, and the team can look forward to the postseason.

The Detroit Red Wings are currently second in the Atlantic Division and out of 44 games; the team has won 23, lost 14 and needed overtime to register victory on seven occasions. In their last game, the Red Wings defeated the Coyotes 3-2 after the game went into overtime tied at 2-2. After failing to register much offense for the first fifty minutes, the team rallied late on to end the Coyotes four game winning streak. Their goalie made some big saves during the game and kept his team in the game.

The Chicago Blackhawks are currently second in the Central Division, and the team has won 29 out of 46 games, losing 13. The team needed overtime on 4 occasions in order to register victory. In their last game, they defeated the Canadians 2-1, and even though Ryan Garbutt scored in the 13th minute, his goal proved to be the difference. In other news, the Blackhawks have extended head coach Joel Queenville’s contract, giving him an extension of three years.

The Los Angeles Kings are currently leading the Pacific Division, and out of 42 games, the team has won 27 and lost 12. They needed overtime on 3 occasions in order to register the victory. The team won its last game and they are on the verge of agreeing an eight-year, $80 million deal with a franchise player. The Arizona Coyotes are second in the Pacific Division and the team has won 22 of its 43 games, losing 16 and needing overtime on 5 occasions in order to guarantee victory. The team lost its last game, going down 2-3 to the Detroit Red Wings. The Coyotes are now going with eight defence men on the roster after acquiring Jarred Tinordi via a trade.

The NHL playoffs are set to kick off on Wednesday, April 13, 2016. In the Eastern Conference, the Canadians, Senators, Bruins, Rangers, Capitals, Penguins, Islanders and Red Wings are currently in the playoffs, but come April, we expect Tampa Bay lightning to gate-crash the party at the expense of the Bruins. In the Western Conference, the Dallas Stars, Nashville Predators, San Jose Sharks, Minnesota Wild, Chicago Blackhawks, LA Kings, St. Louis Blues and Vancouver Canucks are currently set for the playoffs. However, we predict that the Anaheim ducks will take a playoff spot from the Canucks.

So you can get set for the playoffs by buying your official team’s nhl hockey jersey right here. We sell officially licensed merchandise and you can get wonderful prices because we buy directly from the manufacturer. Even if your team fails to make it into the playoffs, now is the best time to buy your merchandise when the prices are low. The NHL has come a long way and it currently has 30 teams. You can be sure to get your favorite team’s nhl jersey when you shop with us.

I am a author for the sports blog articles posted on Detroit Game Gear's Blog. I keep you the sports fan, current on all the sports team news and give you my opinion towards what is going on in the world of pro sports.